Full 2013 Apple Therapy – Sports & Rehab Millennium Mile results.
LONDONDERRY – Despite freezing temperatures and a wind that at times made the downhill course much colder, the Apple Therapy Millennium Mile road race drew its largest field yet Tuesday afternoon, attracting more than 1,300 runners and walkers for the 14th annual holiday jaunt down Mammoth Road.

They ranged in age from 2 (Addison Ntengeri of Nashua, who finished in 9 minutes 10 seconds) to 76 (Litchfield’s Bill Spencer, who crossed the line in a spritely 6:18), with Concord resident and Franklin Pierce University runner Makop Rugabirwa leading the way in 4:07. 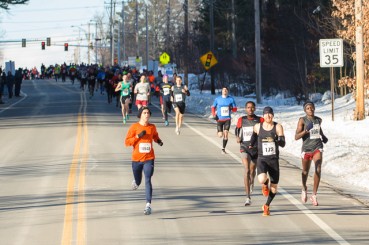 Antoine Gisore – like Rugabirwa, a refugee from Congo who graduated from Concord High and transferred to Franklin Pierce in Rindge after starring at New England College in Henniker – was just one second behind his friend and teammate, in 4:08.

Joanna Murphy of Cambridge, Mass., and the New Balance Boston running team led the women’s field in 4:36. Former University of New Hampshire standout Sydney Fitzpatrick of Billerica, Mass., was second in 4:40. Sarah Lagasse of Rindge, a graduate assistant at Franklin Pierce, was the top New Hampshire woman, in 5:08.

A total of * official finishers crossed the line before the clock was turned off at 13 minutes, with the elite runners pacing a field that included toddlers, grandparents and moms pushing strollers from the start between Londonderry High School and the town fire department and the finish in front of St. Peter’s Episcopal Church, just past Mack’s Apples.

Two of the race’s founders, former collegiate all-Americans Andy Downin and John Mortimer, whose Millennium Running company now manages the race, marvelled at how far the event had come since its humble beginnings in 1999.

Around 120 runners participated in the inaugural race, which included Mortimer, Downin and other elite runners who had come together for a New Year’s Eve party and a bid to run a mile in less than four minutes (albeit on a downhill course). Over the years, the race has consistently grown more popular. Last year…  Read full story by APRIL GUILMET at the Union Leader