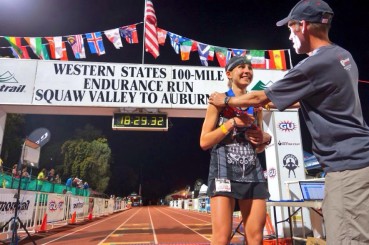 It is often said that when a New Hampshire athlete competes well in a competition outside New Hampshire he/she brings pride and honor to the Granite State. That couldn’t be more true with the indescribable performance by Strafford’s Larisa Dannis. Dannis was in California this past weekend to take on the incredible challenge of the Western States 100 Mile Endurance Run, the world’s oldest and most prestigious 100 mile trail race. Finishing the grueling endeavor in 18 hours, 29 minutes, 12 seconds Dannis was second female, just under 28 minutes behind the winner, Stephanie Howe of Bend, Oregon. Dannis was also 22nd overall, out of 297 official finishers who made it to the finish line in the required 30 hours to receive one of the coveted Western States Endurance Run belt buckles.  Full Results

Spitsburg and Klene share the winner’s circle again- Over three months after two Manchester runners, Richie Spitsburg and Mary Klene, won the Fat Tuesday 5K the two topped the field at the Goffstown Gallop Five Mile race. Spitsburg, who also won the Harvard Pilgrim Corporate 5K in Nashua in May, won the Goffstown race in 28 minutes, 11 seconds, 17 seconds ahead of runner up Stephen Fortin of Goffstown. Third place went to another Goffstown runner, Andy MacGibbon who finished in 29:13.
Klene, a member of the Millennium Running women’s team, recorded her sixth road race win of 2014. Klene finished in 32:17 with Deborah Slason of Goffstown finishing second in 33:50. Finishing third was Bedford’s Susie Black in 37:29.
This was the 35th year of the Goffstown Gallop, making it one of New Hampshire’s oldest road races.
Full Results

Freeman and Wood top the field in Northfield- A week after being the top New Hampshire runner at the Northeast Delta Dental Mt. Washington Road Race, New Hampton’s Justin Freeman was the top runner overall at the Aurlow Stanley Memorial DARE 5K Road Race in Northfield. Freeman turned in the only sub-16:00 performance of the race, winning in 15:47. Webster’s Colton Ham, winner of the Rock N Race 5K this past May in Concord, was second in 16:40 with Concord’s Keith Lundquist finishing third in 16:52.
On the women’s side Abbey Wood, the 2013 Capital Area Race Series women’s champion, took top honors in 19:53. Second and third females were Nashua’s Callie King (22:39) and Franklin’s Kelly Fulles (23:37). Results

6th Annual Run for the Lake 5K and 10K, New London: New London’s Josh Steffen running for Millennium Running’s men’s team and Jamie Wade of West Hartford, Ct. were the top runners in the 10K with Riley Shepard and Sidney Pilot, both from N. Pomfret, Vermont winning the 5K. Results

Using timed finishers as the measuring stick what is the largest 5K in the Granite State? Answer next week.

Last week’s question: Who are the only two runners to win both the Boston Marathon and Northeast Delta Dental Mt. Washington Road Race? John J Kelly and Jackie Garreau.