Jeanie’s Journey 5K– It isn’t often that a Somersworth road race attracts a lot of attention but that was the case on October 11th at Jeanie’s Journey 5K. That’s because the winners created something not often seen at any road race anywhere in the U.S. The men’s winners was long-time runner Dave Dunham of Ward Hill, Massachusetts while the women’s winners was Somersworth’s Lisa McNulty. Now comes the interesting part. Dunham is 53 years old and McNulty is 50. How often are both winners of a road race 50 or older? That also means the combined ages of the winners were 103. There are no official records to document if that is a New Hampshire road race record for combined ages but you would be hard pressed to find a race that beats that number.

UNH Homecoming 5K- Anyone who knows the history of track and field in the Boston, Massachusetts area knows the names of Bruce and Lesley Lehane. Lesley, and her twin sister, Lisa, were All-American runners and Boston University while Bruce has been a long-time coach in the Boston area. Obviously the apple didn’t fall far from the tree as the Lehane’s son, Ethan Lehane, traveled to Durham and won the UNH Homecoming 5K in a course record time of 15 minutes, 10 seconds. Rachel Lee, of South Hadley, Massachusetts was the women’s winner. There were 264 runners and walkers who finished. 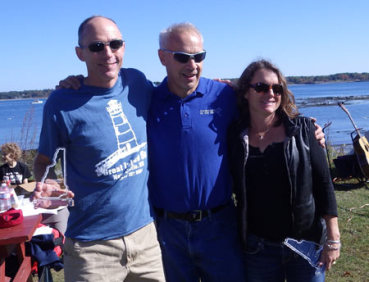 What road race is the only USATF certifield 12K in New Hampshire?

In 1995 Durham’s Cathy O’Brien finished the Clarence Demar Marathon in Keene, in 2:33:56, the fastest time a woman has run a marathon in New Hampshire.

ATHLETES OF THE WEEK

Male: Derek Hamel, Northwood- In the first half of 2014 Hamel was the most dominant runner in the Seacoast region of the Granite State. Amongst his wins were the Great Bay Half Marathon, Runner’s Alley/Redhook 5K, and Smuttynose Will Run For Beer 5K. During the summer Hamel spent more time training and running trail races but he got back on the roads with a win at the Memorial Bridge Run.

Female: Amy Bernard, Hampstead- This is the second  time in 2014 Bernard wins this honor having last received it in late August when she won the New Hampshire XC Festival. Once again Bernard shows her top form as one of the state’s top female runners with a first place finish at the biggest race over the Columbus Day Weekend, the Great Island 5K, a race with well over 1,000 finishers.