Andy’s Roundup- Fireworks on the roads of Manchester…and more 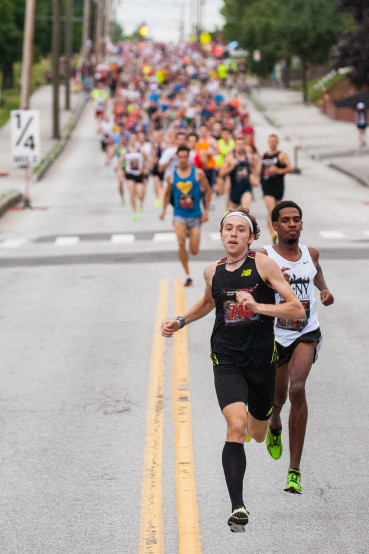 Fullerton finally finishes first- After finishing third in 2012 and second in 2013 Pat Fullerton of Bradford, Massachusetts finished first at the Hinckly Allen Manchester Mile on July 3. With the rain holding off conditions seemed just ripe for a fast run and Fullerton did not disappoint. Racing down the long hill during the first half mile of the race Fullerton was on record setting pace. However, he would later admit the fast start wore him out and he could not keep up the record pace but held on for the win with a time of three minutes, 46.7 seconds just ahead of Christian Gonzalez of Somerset, New Jersey who finished second in 3:47.8. Third place went to Sebastian Putzeys of Newton, Massachusetts in 4:00.

Lebanon’s Laura Hagley continued a strong 2014 by winning the women’s race in 4:31.8. Representing the Millennium Running women’s team Hagley was in control most of the way and finished about ten seconds ahead of runner-up Bevery Antunes of Somerville, Massachusetts (4:41:.6) Rounding out the top three women was another Bay State runner, Meagan Nedlo of Salem, Massachusetts (4:45.3).

Spitsberg and Klene share the spotlight again- For the second time in five days, and the third time in 2014, two Manchester runners Richie Spitsberg and Mary Klene, were the men’s and women’s winners at the same race, this time at the Hinckley Allen Manchester 5K, an event that took place just prior to the Hinckley Allen Manchester Mile. Just as they did when they won the Goffstown Gallop on June 28 Spitsberg and Klene dominated their competitions. Spitsberg won with a time of 16:04, 37 seconds ahead of second place finisher, Alex Saveliev (16:41). Klene, who ran 18:20, was 42 seconds ahead of the second place woman, Goffstown’s Deborah Slason, who finished in 19:02.

Perhaps the biggest story of the night, for both the One Mile and 5K races was the weather conditions. After a torrential downpour about four hours before the start the anticipated thunderstorms never materialized in Manchester, leaving everyone to speculate the charm of Millennium Running events.

Results for both the one mile and 5K: http://www.millenniumrunning.com/results-hinckley-allen-manchester-mile-5k/12512

Robie Rules The Roads of Nashua- It doesn’t happen often so when it does it is worth noting. “It” is when a female runner is the first overall finisher of a New Hampshire road race and that is exactly what happened on July 4 at the Revolution Run 5K in Nashua. Milford’s Tammie Robie beat the entire field with a 18:58 performance, finishing first amongst 206 finishers. The top male was David Connally of Tyngsboro, Massachusetts in 19:38.

Robie’s win marked the third time in 2014 a female runner has been first overall at the New Hampshire race, joining Newmarket’s Keely Maguire and New London’s Jen Mortimer. Maguire was first at the Chief Mahoney 10K Unity Run in April while Mortimer topped everyone at the New Hampshire Fisher Cats Mother’s Day 3K in May. Robie, Magurie, and Mortimer all run for the Millennium Running women’s team.

Gray repeats on a N.H. Mountain- Joe Gray may live in Colorado Springs, Colorado but he would appear to own the mountains of New Hampshire. Fifteen days after winning the Northeast Delta Dental Mt. Washington Road Race Gray was back in the Granite State and won the Loon Mountain Race, the 2014 USATF National Mountain Running championship. Gray covered the seven mile men’s race in 45:52, almost one minute ahead of Pat Smyth of Salt Lake City, Utah who finished second in 46:39. Eric Blake of West Hartford, Connecticut, who finished second to Gray at Mt. Washington, was third in 52:37
In the women’s race, which was 4.8 miles, another Colorado Springs runner, Allie McLaughlin, was the winner in 47:12. Rounding out the top three were Morgan Arritola of Ketchum, Idaho (48:15) and former New Hampshire runner, Kasie Enman of Huntington, Vermont (48:20).
Results: http://www.coolrunning.com/results/14/nh/Jul6_LoonMo_set1.shtml

Canaan 4 On The Fourth, Canaan– Boulder, Colorado’s Simon Pendleton and Kaitlyn Schmidt of Cambridge, Massachusetts were the winners.

4K On The Fourth, Concord– Two Concord runners are the winners, Mike Frappier and Michaella Conery

What race is the site of the fastest 5K ever run in New Hampshire?