Fisher Cats Thanksgiving 4K, Manchester– Because snow covered the field at Northeast Delta Dental Stadium, the original finish line of this race, the course was shortened from a 5K to a 4K and finished outside the stadium. Alton’s Cody Symonds was top male and Manchester’s Megan Boucher was top female. There were 1,395 finishers which meant that in its fourth year this race is batting 1.000 for hitting the 1,000 mark for finishers. 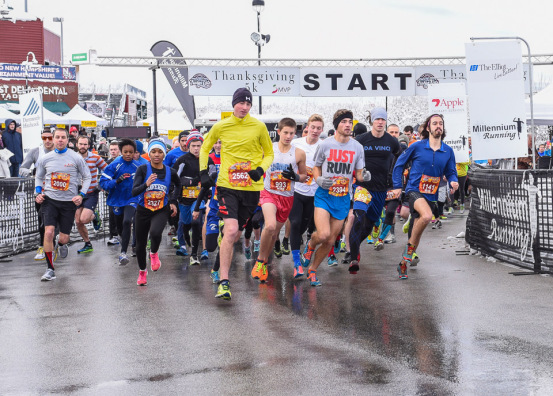 Free Fall Classic, Rochester– Alton’s Drew Tuttle and Abby Jackson of Dover were the winners. There were 232 finishers.

Lake Sunapee Turkey Trot, Sunapee- There were 422 finishers with Warner’s Tristan Amoural winning on the men’s side and Emily Sundquist of Salt Lake City, Utah winning on the women’s side.

Wobble Gobble Four Mile Road Race, Keene– For the second year in a row Brett Mastrangelo (hometown not listed in results) was the men’s winner while the women’s winner was Rachel Klaski. The numbers: 296 finishers.

Galloping Gobbler, Concord- Concord’s Nacho Hernando took first place on the men’s side. The women’s winner of the race was Hopkinton’s Lauren Klinker. One hundred and 79 runners and walkers finished.

What Portsmouth race was a New England Grand Prix race from 1998-2000?

What is the oldest Thanksgiving Day race in New Hampshire? The Greater Derry Turkey Trot. This year was the 41st year of the race.