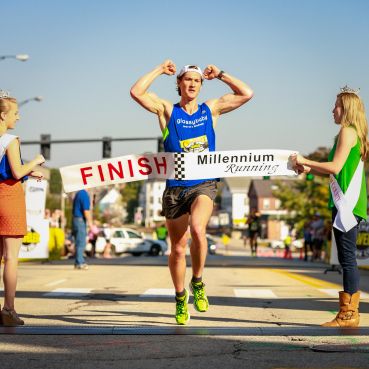 Traveler Beer Co. New England Half Marathon- Over 1,500 runners and walkers took part in the first ever Traveler Beer Co. New England Half Marathon, a race that started at New Hampshire Motor Speedway in Loudon and ended in front of the State House in Concord. The exact number of finishers, 1,520 set a New Hampshire road race record for the largest number of finishers ever for a first year half marathon.

At the front of the pack two outstanding runners, Durham’s Aliksandra Leuchanka and former Concord resident Peter Harrison, now living in Seattle, Washington ran together for about ten miles. In the final three miles Harrison pulled away and won in a time of 1 hour, eight minutes, 51 seconds just seven seconds ahead of Leuchanka who finished in 1:08:58. Concord’s Nacho Hernando was third in 1:11: 35.

Clarence DeMar Marathon/Half Marathon– A great New Hampshire road race continued with the 2014 Clarence DeMar Marathon/Half Marathon in Keene. Marathon winners were Gilsum’s George Adams in 2:41:17 and Oakland, Maine’s Lydia Kouletsis in 3:07:354. Winners of the half marathon were Keene’s Thomas Pacquette (1:11:33) and Jessica Anderson of Winchedon, Massachusetts (1:27:07).              There were 360 finishers of the marathon and 292 half marathon finishers.

WOW Fest ’14-  Winners of the 5K were Laconia’s Alexander Hilson and Gilford’s Vanessa Ganakos. The 10K winners were husband and wife Sam and Abby Wood of Laconia.

Run For One 5K For Haiti, Nashua, October 4

Since this is known as “Fall Marathon/Half Marathon season”, what is the largest marathon in New Hampshire road race history?

ATHLETES OF THE WEEK

Male: When Peter Harrison registered for the Traveler Beer New England Half Marathon he listed his current residence, Seattle, Washington, as his home. When he ran at the front of the pack it appeared an out of towner would win the race. Then it was discovered that Harrison was from Concord, had attended the St. Paul School and ran for Amherst College. So, you could consider his win at the Traveler Beer New England Half as a win for a local runner. You could also consider his winning time of 1:08:51 as real fast.

Female: What a year for Lebanon’s Laura Hagley. Earlier in 2014 she traveled to upstate New York and won the Buffalo Half Marathon. Throughout the year she has competed for the Millennium Running Women’s team and has helped them to a big lead in the New England Grand Prix Series. Her latest accomplishment was a time of 1:18:37 and a win at the Traveler Beer New England Half.