Katie McQuaid’s Scene in Manchester: Ready, get set for some more fun runs
BY KATIE McQUAID 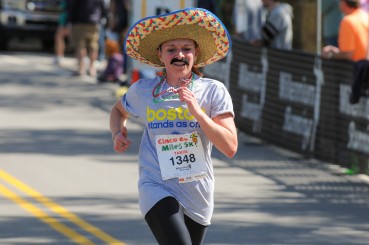 John Mortimer and his team at Millennium Running are running out of holidays. The road race company already organizes a Santa Shuffle, Shamrock Shuffle, Thanksgiving Day 5K, Trick or Trot, The HASLAW Manchester Mile and 5K, which takes place around the Fourth of July and the Millennium Mile, which takes place around New Year’s Day. There’s even a Halfway to Saint Patrick’s Day race.

This Sunday will be Millennium Running’s first ever Cinco de Miles 5K, which as you probably guessed, will honor Cinco de Mayo. I can’t recall when people around here started recognizing the holiday that celebrates Mexican culture. I think Mexican culture is “muy buena,” but for most celebrants, I think Cinco de Mayo is just another excuse to drink adult beverages in the middle of the day. Not that there’s anything wrong with that.

The Cinco de Miles race, which is being billed as “Nacho average race,” begins and ends at Shorty’s Mexican Roadhouse on the Manchester/Hooksett border. In full disclosure, I waitress at Shorty’s a couple days a week, and am already bracing myself for the 1,500 racers who will each receive (as long as they are over 21) one free beer and one free margarita after crossing the finish line.

You read that right. Beginning at 9:30 a.m., 1,500 racers, many of them likely wearing sombreros and shaking maracas, will be making their way through a course that heads north on Bicentennial Drive and winds its way around a few neighborhoods in Hooksett. Then they will all come back to Shorty’s and demand drinks at the same time, even before the clock strikes noon.