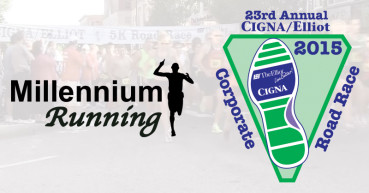 Millennium Running has been contracted by Cigna and Elliot Health System to serve as the management and timing company for the event this year.

About Cigna: Cigna Corporation (NYSE: CI) is a global health service company dedicated to helping people improve their health, well-being and sense of security. All products and services are provided exclusively by or through operating subsidiaries of Cigna Corporation, including Connecticut General Life Insurance Company, Cigna Health and Life Insurance Company, Life Insurance Company of North America and Cigna Life Insurance Company of New York. Such products and services include an integrated suite of health services, such as medical, dental, behavioral health, pharmacy, vision, supplemental benefits, and other related products including group life, accident and disability insurance. Cigna maintains sales capability in 30 countries and jurisdictions, and has more than 88 million customer relationships throughout the world. To learn more about Cigna®, including links to follow us on Facebook or Twitter, visit www.cigna.com.

About Millennium Running: Founded in September 2010 by NH native John Mortimer, Millennium Running hosts 16 unique races in New Hampshire each year which have raised over $320,000 for local charities and organizations. Millennium Running manages over a dozen events, now including the two largest races in NH, the Cigna/Elliot Corporate 5K Road Race in Manchester and the Merrimack Savings Bank Rock N Race in Concord. Millennium Running provides timing services for over 100 events annually in New England. Media inquiries should be directed to Susanna Fier, VP, Public Affairs & Marketing, Elliot Health System by paging 603-639-4787 or via email at sfier@elliot-hs.org.

For people interested in the race or for anyone in need of general information about the Cigna/Elliot Corporate 5K Road Race, please email or call John Mortimer: jmortimer@millenniumrunning.com | 603-512-1976.