I like to drink. It doesn’t make me a bad person. I work full time, own a home, take care of my two children, take care of my mom,  and I run. A lot.  So if I enjoy a little fruit of the vine at the end of the day, so be it.  Given how much I enjoy an adult beverage, and how much I’ve learned to tolerate running, you can imagine how elated I was to discover “M running” ( I suppose I shall protect their anonymity as I have everyone else’s but suffice to say it is the greatest running company in the country…) M running faithfully combines two of my  great loves. Running and beer.

When D and I started running regularly, we went in search of fun races (flashback to the bikini run…) The problem being there weren’t many races in our local area. Often we had to travel over an hour or out of state to find a really fun race.  Then one afternoon we saw an ad for a race called the “Santa Shuffle”. A 5k race down the center of town and all the participants would wear a Santa Suit (free with registration!) And it came with beer! This was a no brainer. We went home and signed up immediately.

The Santa Shuffle ended up being the best race we had ever done. Not because we PR’d, but because we had a ridiculously good time. My friend Suzy and her husband had recently started running too and also signed up. After enjoying the sight of over a 1000 people running down the street in Santa Suits (that alone was worth the price of registration!) we were each given two free beers to use at several local bars. Two free beers! The four of us literally bar hopped down the street while taking in the Christmas Parade, all along dressed in our silly Santa costumes. Hundreds of runners (all dressed like Santa mind you) filled the local bars, making rather merry. It was so jolly I had forgotten we just ran 3 miles.

A few weeks later, we received an email from M running announcing the formation of a new social club. It was advertised as  “A drinking club with a running problem”  I gave it zero thought. Since I still didn’t really consider myself a runner I certainly did not think I belonged in any such club. D however thought it would fun for us to go to the first “meeting” and see what it was all about and signed both of us up. Ok….I suppose I could go, but deep down I knew we did not belong there. But he’d have to figure that out on his own.

Call me crazy, but I was even more surprised when I learned we had to RUN at this club! I literally thought this club just met at different bars to enjoy a frosty beverage and talk about running. I didn’t think I had to actually run with these people! Seriously?? I did not want to run with people I didn’t know. I was sure they’d be better and faster than me. And if nothing else, I was sure they at least liked running, which I certainly did not…

So the dreaded Thursday night arrived when we were to attend the first “meeting” of this running slash drinking club. There was no getting out of it. D was insistent we give it try. Again I was  nervous, because as you’ve learned, my confidence level has always been my greatest obstacle.  What if they wanted us to run 5 miles? What if they ran a 6 minute mile? What if I couldn’t keep up? Or got lost? What if ? What if? What if???

After changing my outfit five times, we arrived at the chosen bar.  “Can’t we just stay and drink and forget the running part?” I begged. “No.  You’ll be fine and it will be fun” D, the self proclaimed runner hater assured me.

And it was. When Mr. M (the founder and owner of M running and runner extraordinaire) arrived at the bar, he thanked the dozen of us that showed up for coming to the inaugural  meeting. He then handed us all a ticket, good for one free beer of our choice after the run. Yay! I recalled those tickets from the Santa Shuffle…and I liked them. Then he announced that we would run about two miles but people were free to do more or less depending upon how they felt. The only “rule” was that nobody runs alone or gets left behind.  Two miles? Only two miles?  Even I can do two miles!! Phew! This was a relief.  I wasn’t going to be humiliated after all.

D and I continued to go to drinking club, er, I mean running club each week. And each week, the faces became more and more familiar. And new faces showed up each week. Thursday nights quickly became me and D’s  “big night out” since we were kid free. We would run our usual 3 miles and then have drinks and dinner back at the designated bar. We began to meet some really great people.  And we’d see most of the same people at races. We’d all congregate before and after the run and stretch and mingle and mingle and stretch.   No longer was I that timid girl hanging out by the porta potty, hoping to pick up a friend (remember that pathetic girl?).  Now I could show up at races and immediately recognize a few dozen people. For the first time in my life I felt like one of the “cool kids”. And I loved it. Race day became one big party!  Over the course of that first year, our running acquaintances gradually turned into “facebook friends”, and eventually into true friends. I don’t quite know how or when it happened, but my running club friends have become like family to me. 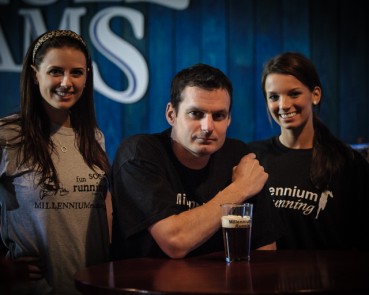 Perhaps it’s because all runners have a story. You all know my story.  But I know I’m not alone. I’ve learned that all runners have a story.  And ironically many of our stories begin with “I hate running but…” I’ve learned most of us don’t run because we enjoy running (though a few of you weirdos actually claim to like it. but honestly, I’m not buying it…). We run because something drives us to run. It might be our past. It might be our present. But what bonds us is that we all find relief in pounding the pavement. And when we run, we will talk about anything and everything…except running. We talk about all those reasons we DO run. We talk about our lives. And perhaps that is why this running club has become like a family to me. Because week after week, we run together. And we talk to together. We joke together. We laugh together. And yes,  we drink together. It doesn’t make us bad people.

But just like a real family, we also support each other. We support each other through training and through injuries. During races and in ruts.   We’ve comforted each other through illnesses, accidents, divorces and deaths (of loved ones and of pets!) We carried each other through the Boston Marathon Bombing, reaching out to those who were personally affected. On the flip side, we’ve also happily celebrated  holidays, vacations, births and birthdays together (Do not even get me started on my week long 40th birthday celebration…it was a doozy!) And though running is what bonded us, it not what keeps us coming back. It is true friendship and understanding. I’ve said it before and I’ll say it again…runners “get” each other in a way that no other community can possibly comprehend. We support each other in a way that is indescribable. Because we all have our story. And it is those stories that drive us to log those long miles. To hit the pavement day after day. And I could not continue to do it without the love and support of my running club peeps.  They are amazing and inspiring men and women.

I never could have imagined that showing up to a bar for a group run on a random Thursday night in March could have influenced my life so dramatically.  But it did. So there is just one question remaining….

Why haven’t you joined yet?