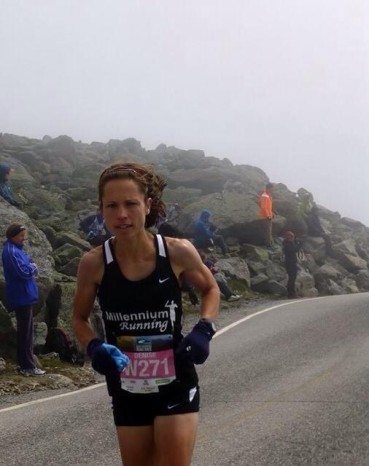 A Cold Day At Mount Washinton– Only at the summit of Mount Washington can the first day of summer feel like winter. With a wind chill factor in the 20’s over 1,000 participants finished the 54th Northeast Delta Dental Mount Washington Road Race on Saturday, June 21. Leading the way were a couple of runners from Colorado Springs, Colorado, Joe Gray and Shannon Payne. It was an emotional win for Gray who had finished second in 2012 and 2013 and admitted before this year that he was wondering if he would ever finish first. Gray not only accomplished his goal but finished in 59 minutes, nine seconds, only the eighth time a winner had broken one hour at the race to the clouds.Three-time winner Eric Blake of West Hartford, Ct. was second with 2012 winner Sage Canaday of Boulder, Colorado finishing third.

Payne created a bit of history herself. Running the NEDD Mt. Washington race for the first time Payne’s winning time of 1:10:12 was the fifth fastest time ever for women. At the awards ceremony she told the crowd she felt her day had gone well.

“I had heard so much about how difficult the race was so I took it easy in the first half,” Payne. “That allowed me to maintain a good pace throughout out and it never got too difficult.”

The other highlight of the race was the awarding of the Crossan Cup, given to the top New Hampshire male and female (named after four-time winner Gary Crossan, a New Hampshire native). New Hampton’s Justin Freeman was the men’s winner for the second year in a row while Bow’s Denise Sandahl was the women’s winner in her first attempt at the race.

The only disappoint of an otherwise spectacular day was George Etzweiller’s inability to run. Etweiller is 94 years old (yes, you read that right) and has finished the race the past three years as the only 90 and older runner ever to finish. He showed up but had to drop out because he was under the weather. He vows he will be back in 2015.

Smuttynose Will Run For Beer 5K

Hamel Continues to Shine – You could make an argument that Northwood’s Derek Hamel is having the best year of any New Hampshire male at 2014 New Hampshire races. Prior to this weekend Hamel recorded wins at major N.H. races including the Great Bay Half Marathon, Runner’s Alley/Red Hook 5K, and Margarita’s 5K. Hamel added to his wins on Sunday, June 22 when he beat over 1,400 runners and walkers at the Smuttynose Will Run For Beer 5K in Hampton. Hamel finished in 16:09 almost 90 seconds ahead of second place finisher Randy McNeil of Epping.
The women’s race was much closer Ariel Beccia traveled north from Rutland, Massachusetts and took top honors in 18:40 only three seconds ahead of New York’s Megan Lessard.

The race was the final race in the 2014 Will Run For Beer Series and hundreds of participants went home with their new souvenir lime green jackets for completing the series.

The Birthday Girl Celebrates – Lebanon’s Laura Hagley turned 30 on Sunday and did so with a win, taking top honors at the 11th Annual Shaker Seven in Enfield. Hagley, who has been one of the top female runners in the state this year, battled Hanover’s Lorna Young most of the way and won by six seconds, crossing the line in 41:37 to Young’s 41:33.

Click here for complete results of the Annual Shaker Seven.

Some Granite State races to choose from next weekend:

In honor of the Northeast Delta Dental Mt. Washington Road Race- Can you name the only two runners to win both the Boston Marathon and Mt. Washington? Answer next week.