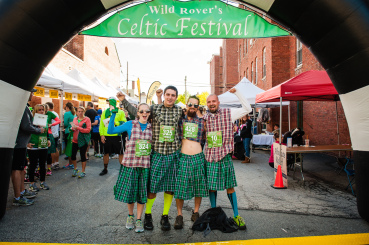 Northeast Delta Dental Halfway To St. Patrick’s Day 5K- From green hats to green shirts to green kilts it was a sea of green that ran the streets of Manchester at the Northeast Delta Dental Halfway To St. Patrick’s Day in Manchester. Concord’s Nacho Hernando, who recently returned to New Hampshire from his home in Spain, was the men’s winner with Hooksett’s Stephanie Burnham winning the women’s race. With her win Burnham is the unofficial queen of Irish themed races having won Millennium Running’s Shamrock Shuffle this past March.

Lone Gull 10K- The Millennium Running women’s team took first place in their division at the Lone Gull 10K in Gloucester, Massachusetts, the latest race on the 2014 New England Grand Prix Series schedule. Lone Gull was the sixth of seven races and the unofficial results give the MR women a 15 point lead in the series. That means the second place team, the Whirlaway Racing Team, would have to finish 15 spots ahead of MR in the final series race, the Manchester City Marathon.

Leading the way for the MR women were Bow’s Denise Sandahl and Lebanon’s Laura Hagley, who finished third and fifth.

Book It To The Library 5K, Hooksett, September 20

Bottomline Technologies Race For A Cause, Portsmouth, September 20

Bite Back For A Cure 5K, Nashua, September 20

Who are the twin brothers who both broke 2:16 at the Austin Marathon in 2006?

Last week’s question: Who is the only New Hampshire runner to break 2 hours, 20 minutes at the Boston Marathon? Ray Currier.